“They Will Just Laser Everyone,” And Other Common Myths, Part 1. 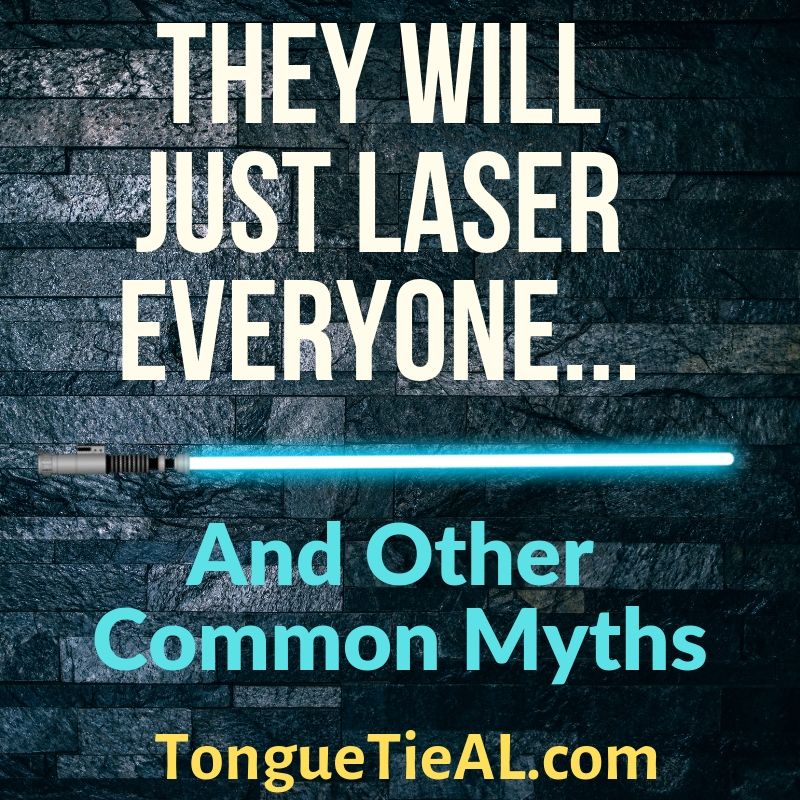 Myth #1: “They will just laser everyone.”

First off, we do not use a lightsaber! We use an ultra-precise surgical CO2 laser that looks like a pen and doesn’t even touch the tissue. It removes tissue layer by layer, and allows us to see all the restriction and remove it safely, quickly, and as gently as possible.

Just the other day, a patient told us that their pediatrician thinks we will “find something to cut on everyone.” So don’t go for a consult, they said. The well-meaning provider will tell the parent that instead of being evaluated for a tie, they should try other things instead. Give the struggling baby a bottle, give formula, take reflux medication (off-label, and has side effects), or “just give it time.”

These suggestions address the symptoms, but not the root cause. Tongue restrictions are widespread, affecting around 20% of babies, but most go undiagnosed, and only the symptoms are treated.

We do not laser everyone that comes to see us. We perform a careful evaluation and listen to mom tell her full story and the child’s story. After understanding all the details and doing an exam, we are in a better position to make the proper diagnosis.

The tongue-tie center is similar to an endodontist’s office in a lot of ways. No one ever goes to the endodontist for fun! Unless my tooth is throbbing and I am in severe pain, I will not step foot into an endodontist’s office for a root canal. Likewise, no one wants to put their baby or child through a procedure and the exercises afterward if it is not necessary or beneficial, and often it’s their last resort.

Just as the endodontist does a lot of root canals, at the tongue-tie center, we treat a lot of tongue-ties. That’s literally all we do.

By the time they come to us, patients have often already been to their pediatrician, lactation consultant, speech therapist, GI specialist, or occupational therapist, among others. But they are not finding much relief from their struggles. Often, a friend will mention, “Hey, maybe it’s a tongue-tie,” so they give us a call out of desperation.

We sit down with them and book plenty of time so we can listen to Mom’s story. We do a full consult which is anywhere from 20 minutes to over an hour. This method allows us ample time to discuss all of the secondary issues (spitting up, gassiness, unhappy baby, can’t hold a pacifier, etc.). If a provider assessing a baby or child for a tongue-tie does not have a checklist of these common symptoms for parents to list all the problems, they will not know what is truly going on. These secondary issues by themselves could be considered normal, but often these babies have so many secondary problems that they add up to significant quality of life issues for the family.

Many moms will tell us their doctor was not concerned because “the baby is gaining weight.” (Another myth: Just because a baby is gaining weight, does not mean all is well!) Meanwhile, mom is triple feeding, in excruciating pain, and struggling every day with a mountain of laundry from near-constant spit up and a fussy, hungry baby all day. These are “cosmetic” issues the doctor will say. “Give it time, and here’s a script for Zantac.” Unfortunately, this is the story we hear most often — almost every day.

After listening to the story, we ask follow up questions. We then assess the baby properly from behind. We take pictures of all the areas. Then we have a frank discussion with the parents and determine with the parents if it seems that releasing one site (tongue), both sites (tongue and lip), or none will be best for this baby or child.

If they decide to proceed, they watch a video and are made aware of any financial charges for the procedure up front. A topical numbing jelly is applied. We then pray with the family if they wish, take the baby to the procedure room for 3 minutes, come back, and it’s done. The procedure itself is around 10-15 seconds. It’s surprisingly quick, and often babies aren’t even crying when we return seconds after the procedure.

As you can see, we do not take treating a tongue-tie lightly, and certainly do not perform a procedure on a baby or child unless there are significant issues, a very high likelihood of symptom alleviation, and both parents agree and are ready to proceed.

Myth #2: If one person said there is not a tongue-tie, then there’s no tie.

Often patients come to us after one or a few healthcare providers said “yes there is a tie”, and others said, “no there’s nothing, don’t bother doing anything further.”

Most often, those who said “yes, it looks suspicious” have seen the results of the procedure (even at times when a tie is not obvious). The other well-meaning providers who say “no, there’s nothing wrong” have not taken a course on tongue-ties, read a book on ties, or kept up with the latest research on ties and oral restrictions. Their recommendations often come from what they were taught in their training program 10, 20, or 30 years ago.

And sadly it hasn’t gotten much better. It is still being misunderstood and taught in residency programs today that tongue-ties rarely, if ever, cause issues.

When there is a new way of doing something that goes against the grain of what a doctor was taught originally in school, there is always push back. A famous quote from a past Harvard Medical School dean says, “Half of what we are going to teach you is wrong, and half of it is right. Our problem is that we don’t know which half is which.”

If one person said there is a tie, and ten people said there’s nothing, but the child has all the symptoms, then more often than not, that one person was right, and the other ten didn’t know about posterior tongue-tie. And when appropriately treated, the children often improve.

Myth #3: Treating tongue-ties is a “fad” or new procedure.

Tongue-tie is not new. It’s been around and recorded in history books for hundreds, even thousands of years. Midwives used to keep one fingernail sharp in order to cut the frenum (ouch!). It’s written about in some of the earliest Japanese writings. The concept that a posterior or not to-the-tip tie can cause problems is the new paradigm (since 2004, and really 2010s) that providers are struggling to embrace and understand.

We are treating more now because of increased awareness, diagnosis, genetic factors (a dominant gene) and some unknown environmental factors that seem to be increasing its occurrence.

Is autism a fad because it’s being diagnosed more often and more kids have it? No, that’s insulting to those families struggling with an autistic child, and those providers treating autism. It’s the same with tongue-ties.

Let’s look at why tongue-tie is increasing in incidence instead of blaming those of us who treat it and are trying to help struggling families.

We only treat when there are significant quality of life issues and the presence of a tight restriction. It’s often a “feel” rather than a “look,” although some are obvious and can be seen across the room! Most providers checking babies for a tie will not even put on gloves, but rather use a tongue depressor. Some who do put on gloves assess incorrectly. It must be checked by coming from behind the baby, using two index fingers under the tongue, and lift to feel and visualize the tight fascia.

A restriction will feel like a tight guitar string or speed bump, as Dr. Kotlow suggests. How do we know that was the reason for the child’s problems? Because after we treat it and mom nurses, or gives a bottle, the symptoms often improve that day. Typically they continue improving that week as well, and that treatment was the only explanation for this 180° turnaround. The same is often true for children as well. The only thing that happened was the tongue-tie release, and the child has new words, less choking, better sleep, and overall improvement.

Tongue-ties can cause significant quality of life issues not only in babies, but also in children, and even adults. It causes trouble with speech (sounds like R, L, S, SH, TH, Z, speech delay, and others), solid feeding (choking, gagging, picky eating, slow eating), poor quality sleep (restless, snoring, grinding teeth), as well as neck tension, shoulder pain, and headaches in adults (and some kids).

After treatment, many issues resolve, but which issues resolve varies from person to person. Having myofunctional (tongue retraining) therapy before and after release will allow the child or adult to see the biggest benefit of a release.

Stay tuned for Part 2 coming next week! In the meantime, if you’d like to learn more about ties, check out our bestselling book Tongue-Tied on Amazon, or check out our online courses.

If your child is struggling with these issues, please contact us or schedule a consultation by calling 205-419-4333. We would love to hear your story and see how we can help your family.