“Why Does My Provider (Doctor, Dentist, Therapist) Not Know About Tongue-Ties?” 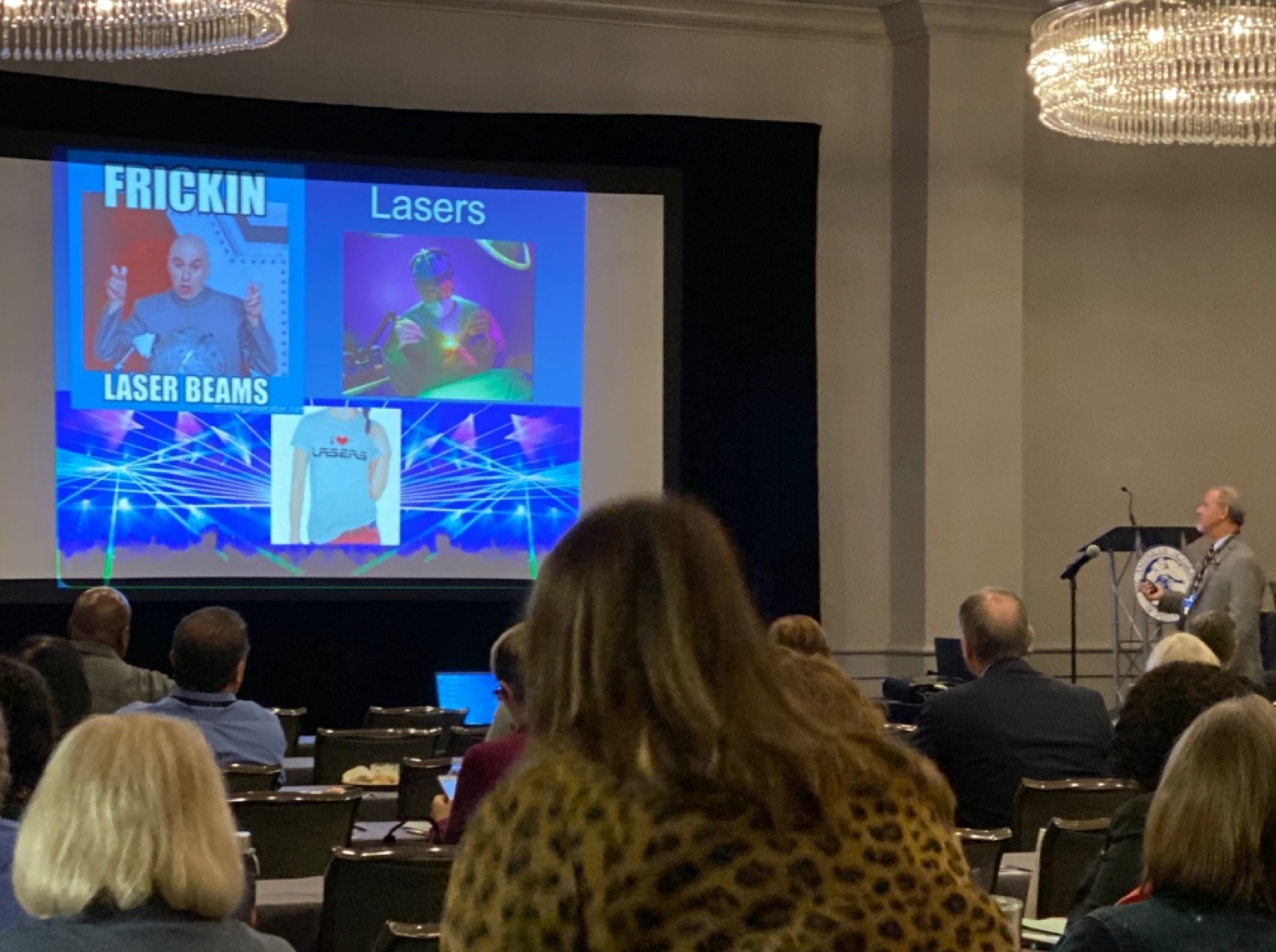 We receive some form of this question daily in our office after parents realize their child has a restricted tongue that is causing the family struggles. It hasn’t been identified previously, or they asked their trusted provider and received no information or even advice against having the tongue-tie released.

Most of the time, the restricted tongue is less obvious and attaches less than 50% of the way to the tip. Those would be considered “posterior” ties, which some like to say “don’t exist” but in fact can cause the same range of symptoms as a to-the-tip tie. For nursing babies, most of the time the babies and moms reporting the most painful latches (7+, toe-curling pain) are less obvious, posterior ties. And the pain resolves after release. The term posterior is not the best, but it’s what most people call it. It just means it’s not obvious and anterior or attached toward the tip of the tongue.

However, we have many come to see us that have an obvious, all the way to the tip attachment, or close to the tip attachment. They asked their provider who said it would “stretch out” or “not be an issue now or in the future.” This thinking comes from a true systemic lack of education on the importance of a restricted tongue in medical, dental, and therapy programs. Your pediatrician, therapist, or dentist is a great person. They have put in countless years of training and dedication to serving families. They just haven’t learned about tongue-ties before, and most of what they now know comes from asking colleagues, or their best guess.

In dental school, we had one slide of one lecture showing a Z-plasty advanced technique for removing a tongue-tie, and the take-home message was, “don’t try this at home, just leave it to us oral surgeons.” The patient must be asleep, and the only reason to do this would be if the patient can’t talk well. That’s literally all we had. In residency, we had one article that was almost 10 years old in a stack of 20 other articles we had to discuss that day. And we read through a lot of articles in residency, so the implication was it’s not that important. Medical and therapy programs’ training is similar.

Pediatricians have very little education on tongue-ties, most of it outdated, like dental curricula. The leading pediatric textbooks say that a tongue-tie will “spontaneously lengthen” and “rarely interferes with feeding and speech.” (Nelson, 2011) These are the myths that are not supported by evidence, but they are in the textbook, so no one questions them. When they do cite an article as evidence, it’s often an opinion piece from 1963 by a British doctor (Wallace) that says it “may interfere with some speech sounds or playing a wind instrument.” It also says that tongue-tie does not affect speech delay, and this myth persists to this day (and was showed to be in error in our recent article.) But that article also says, “much entertaining nonsense has been written about tongue-tie” and has a dismissive tone throughout the article that unfortunately persists today in the pediatric and ENT world. 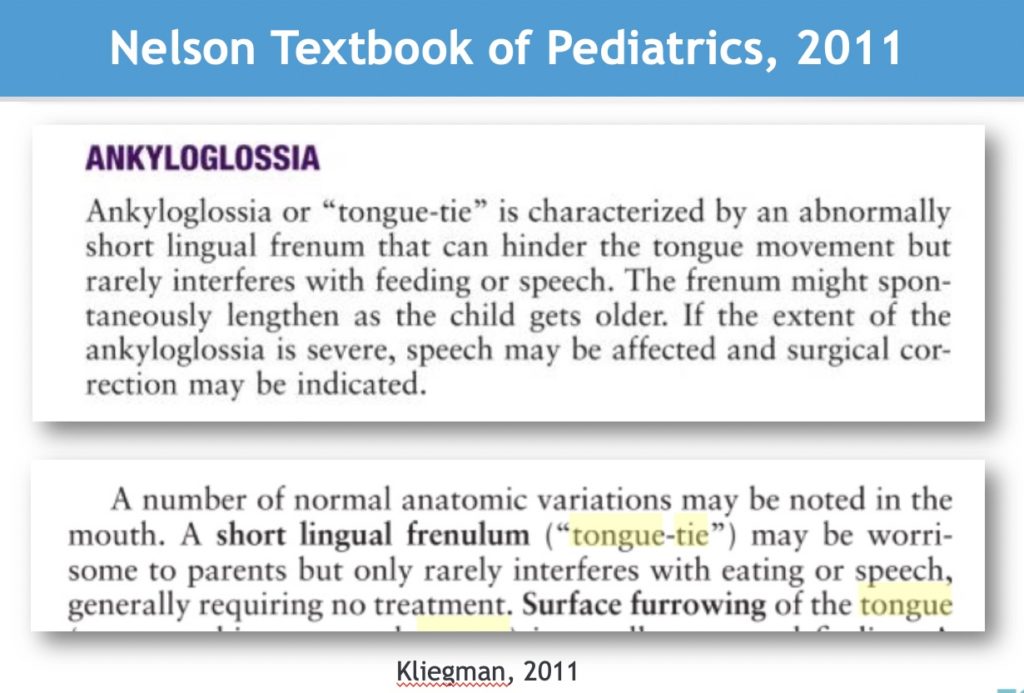 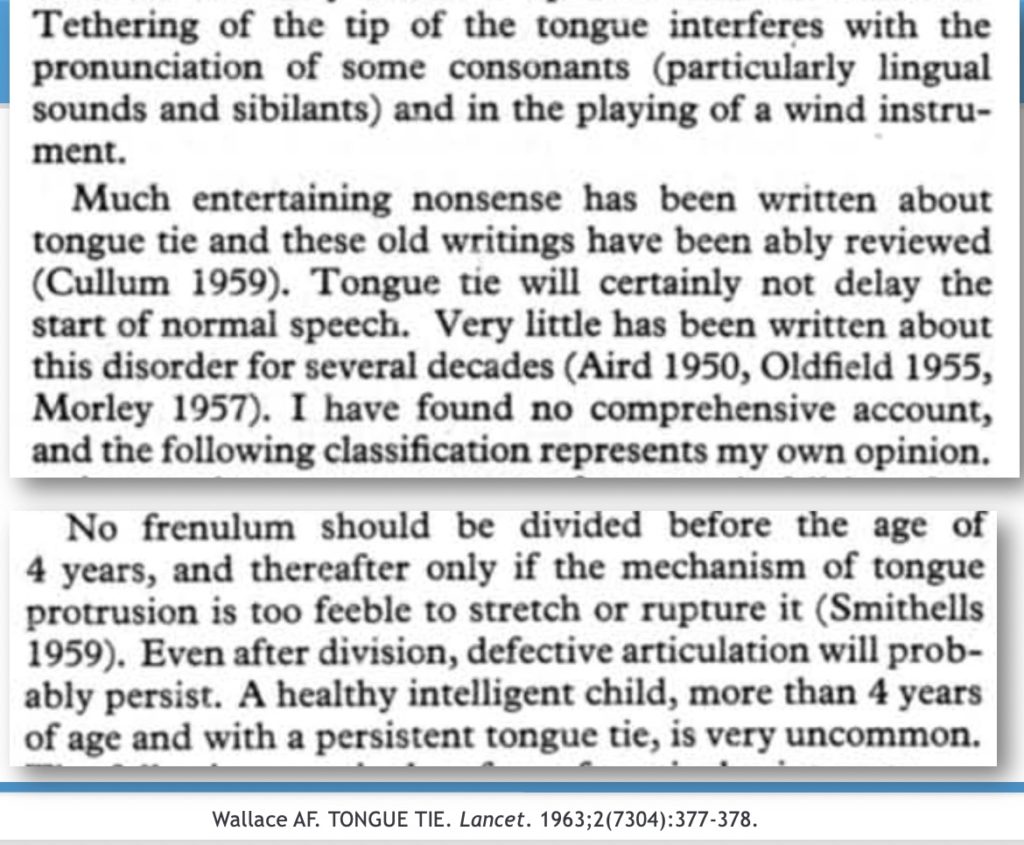 Organizations now are putting out “consensus papers” that are not actually seeking consensus but rather cherry-picking data that supports their position and not allowing anyone who holds a different opinion to participate in the paper (mainly, people who treat tongue-tie daily instead of once a month or once a year). Those excluded people see the results from the procedure and know it works when performed properly, so the people writing the paper don’t want to have debate or discussion, they just want to dictate “here are our opinions, this is our official policy” but pass it off as “evidence-based research.”

Even in my own backyard, at a recent conference for pediatricians in our state, they were taught that tongue-tie rarely causes issues, lip-ties don’t impact breastfeeding, there is no such thing as a posterior tie (just a less obvious restriction), and lasers are dangerous. Here’s a photo to prove it! 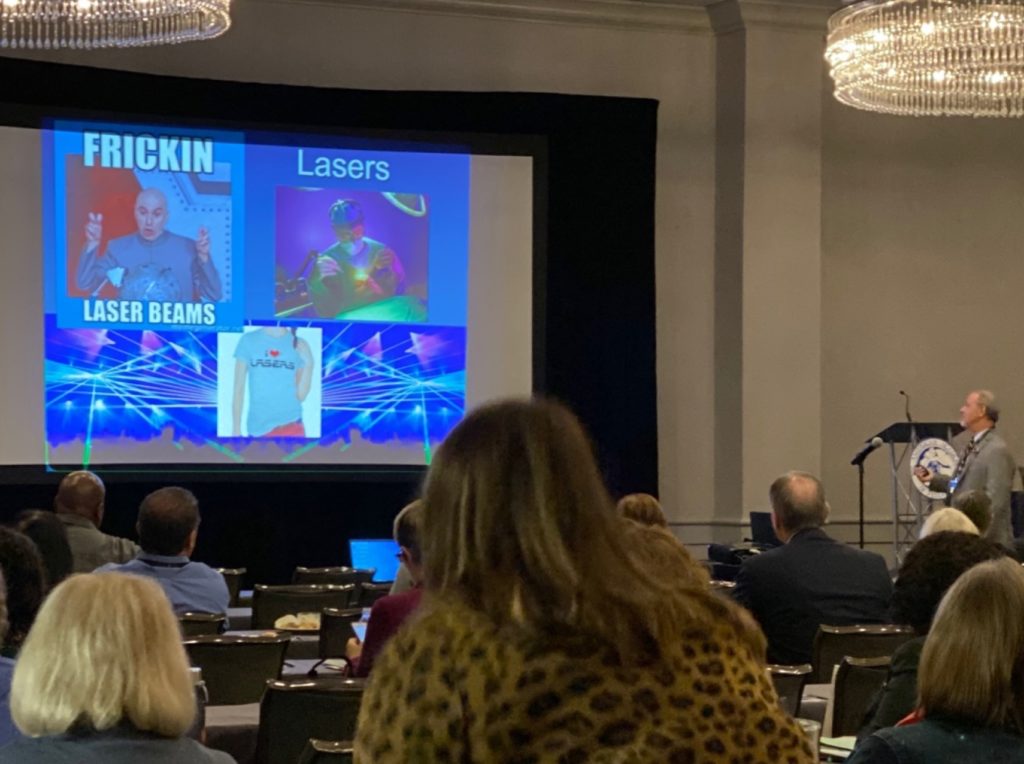 How do we address all of these issues in our office? With humility and understanding, never bashing other doctors or providers, as I was in that same place too when I first heard about tongue-ties. When a lactation consultant told me our girls have a tongue-tie, I immediately said, “no they don’t” because it wasn’t to the tip. I was a dentist and thought I knew what a tongue-tie was. I didn’t know what I didn’t know. But I was interested enough to research further, have an open mind, and now after treating thousands of patients with the procedure, it can and does make a huge difference when performed properly.

To properly release a tongue-tie, you must have a complete evaluation and full history from the parent. A quick look under the tongue with no gloves and only a tongue depressor is what we most commonly hear from patients was the only exam performed on their child. This is not even close to a full exam. The release must be a complete release as well, meaning all of the restricted tissue removed, and a diamond-shaped wound is evident after the release. No muscle is taken, just fascia, down to the genioglossus.

Follow-up is critical to see what happened after the release and change your protocol, refine your technique, and troubleshoot issues. Most parents who see us who had a clip or snip before were offered no follow-up visits and told that stretches are unnecessary. Of course, if the patients aren’t brought back for a check, how do they know if stretches are needed or not or if it healed back together or not? Stretches are indeed important, as it’s the same as if you had your ear pierced but didn’t wear the earring. Every pre-teen girl knows you have to wear the earring or else it will close up, but somehow this is lost on many “clipping” the tongue and moving on.

All this to say, how can we see change? We are doing all we can to educate providers in our community by writing a book (Tongue-Tied), publishing articles and doing research (our recent paper published in Clinical Pediatrics and another in Compendium), sending letters to our patients’ providers, answering countless emails, and speaking at conferences.  More work is clearly still needed, but slowly the tide is turning. We have many pediatricians now referring to us, some after saying “it doesn’t work” but seeing the results in their own patients. Many therapists really see the results because they are working with the families weekly, sometimes for years, and all of a sudden see a massive change, or even a “whoa that was different” response during therapy after a release.

Partnering together for the good of our patients, not excluding one another, and supporting each other as providers is the best way forward. We are always looking to help our colleagues in our area learn more about tongue-ties, so if you are interested, send us a message. We are also dedicated to helping providers worldwide (literally) with this procedure, so we have the book Tongue-Tied, online Tongue-Tied Academy, and live course, all with the goal of educating others so they can help countless patients in their community.

We have to move on from the outdated recommendations of 1963 before evidenced-based practice and see the results that are available to our patients with tongue restrictions if we provide a proper release and follow-up, and always with a team approach to care.