Does a Lip-Tie or Tongue-Tie Affect Bottle-Feeding? 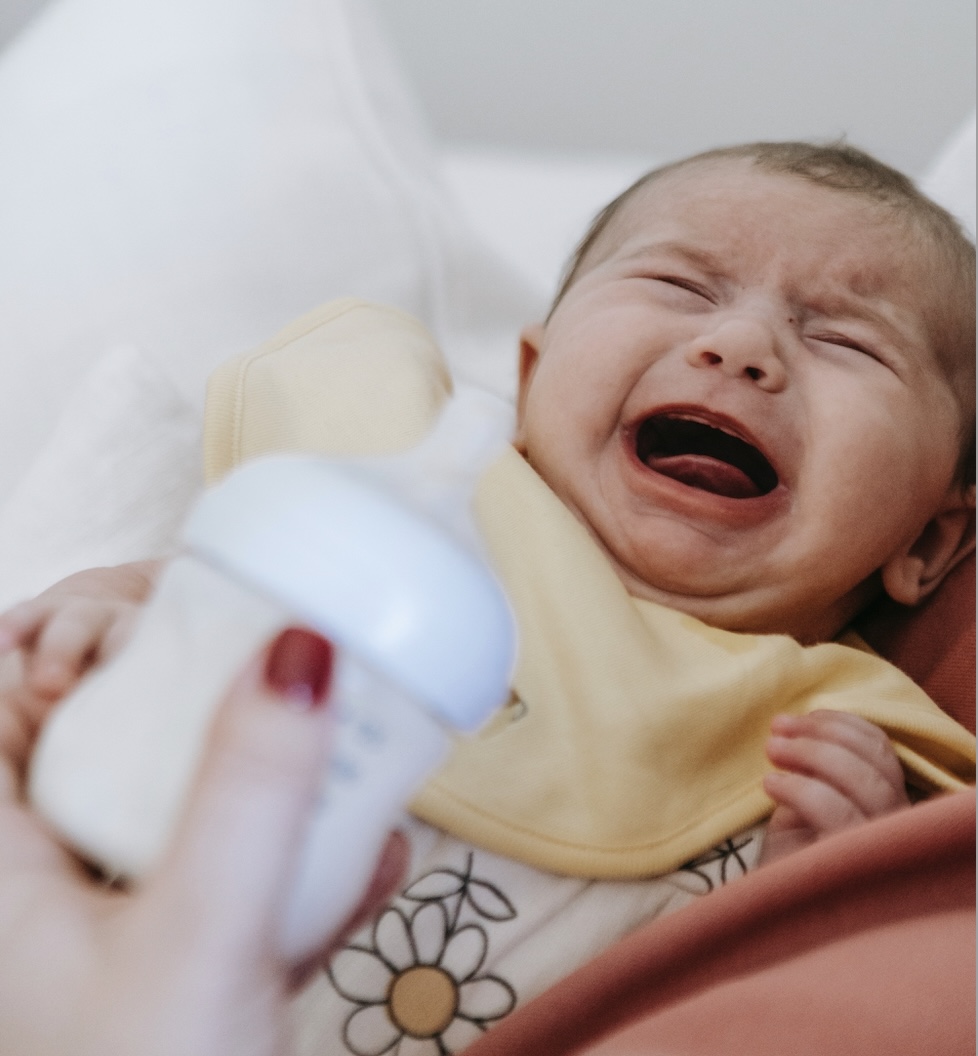 These are excellent questions we hear from parents on a daily basis. Many parents are told by providers to “just give him a bottle” and it will solve the issues they are struggling with from the tongue-tie. The problem is, it’s not true. Switching to a bottle takes away the maternal aspect (pain, plugged ducts, supply issues, etc.), but it does not fix the infant issues of a poor latch, milk leaking out, reflux, excessive gas, colic, and slow feeding with possible weight gain issues.

In the 1920s when formula came out, it was sold to parents as “better than breastmilk” so if a baby was tongue-tied, you might as well feed them formula since it’s “superior.” Fast forward 70 years and with renewed research in the 1990s and an emphasis on breastfeeding, more moms began nursing because, in fact, breastmilk is far superior to infant formula. Also, the act of nursing is superior to bottle-feeding, as it helps to mold the palate, and set the child up for healthy airways and craniofacial growth. That is to say, if you are bottle-feeding, don’t feel that ever-present mom guilt, as babies can still thrive with formula or bottle-feeding, and many moms need to supplement for various reasons (our twins were bottle-fed, and are now thriving 7-year-olds).

With tongue-ties, it’s heartbreaking when moms come to see us months after the baby is born and has been struggling with an undiagnosed tongue or lip-tie, and mom had to give up nursing and has now lost her milk supply. It takes a while for parents to put the puzzling symptoms together, and providers lack education on the impact of tongue- and lip-ties. This happens on an almost daily basis, and to the parents’ surprise, switching to a bottle has not magically solved the problems. They have tried five different bottles and are still struggling. The baby is still leaking milk, fussy, gassy, colicky, struggling to sleep, spitting up all the time, hiccuping after every feed, and seems always hungry. Most of the time, it’s a less obvious posterior tongue-tie, as if it was to-the-tip, many providers would have seen it and informed the parents. (But we see lots of to-the-tip or anterior ties go undiagnosed for months as well, surprisingly! Education in this space is lacking at medical and dental schools and residency programs.)

Recently, a new study by Dr. Bobby Ghaheri confirmed what we see daily at our office. In a randomized controlled trial (RCT), he showed with a special bottle with a computerized nipple, that babies feed more efficiently, are better able to adapt to changes in feeding, and had more rhythmic and coordinated sucking after a proper posterior tongue-tie release. Moms also saw less nipple pain, were more confident in feeding their babies, and the babies had less spit-up, fewer hiccups, and were less fussy after having their posterior (less obvious!) tie released with a CO2 laser. This study is important because it shows that not just anterior or obvious ties cause problems, but posterior ties also cause issues. It also shows that switching to a bottle will not solve the issue. If there is a physical restriction of the tongue, and the baby has the symptoms of a tie (see image), then that baby would very likely experience improvement after a proper, full tongue-tie release by an experienced provider. 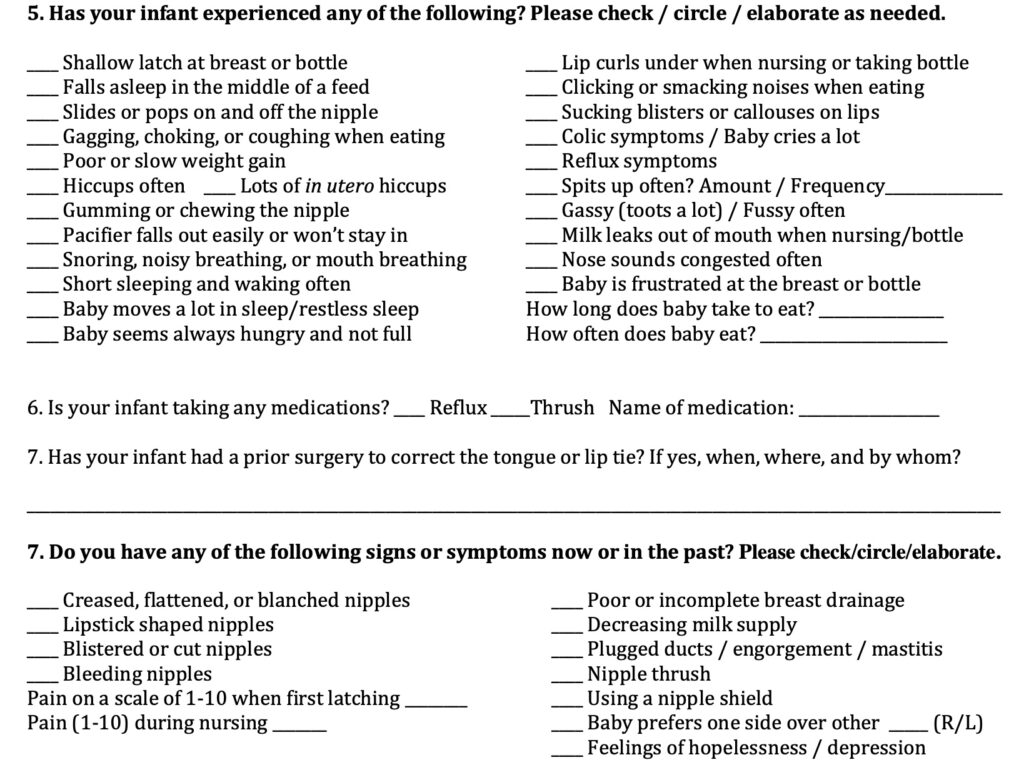 All of the issues at the top of the symptoms sheet can be experienced by bottle-feeding babies. Tongue-ties do not always lead to weight gain issues, so we hear daily that the primary care provider said “he’s gaining weight, so he is fine” and the parents think the tie doesn’t need to be treated. First, mom may have an oversupply, or be constantly feeding him, or any number of other ways to compensate, so the baby is still “fine” but not “thriving.” We want optimal health and growth, not just “fine” or survival. If moms and babies have more than a few symptoms on this form, it means they are on the struggle bus and are not thriving! Plus, a tongue restriction can have lifelong effects including speech, solid feeding, or sleep issues in the future (see below for child to adult symptoms).

Probably 75% of the babies that come see us have a lip-tie that is fairly obvious (that’s what brings them to our office), but also have a less obvious tight, thick, restrictive tongue-tie that is causing feeding difficulty. In fact, for moms that are nursing, the posterior tongue-tie very often is to blame for the 7+, toe-curling pain they are experiencing. This is highly unfortunate because those are the babies that are told to switch to a bottle because of the terrible pain, and moms are told the baby has “no tongue-tie” because it is not easily seen with a tongue depressor or on a quick inspection of the mouth.

If your baby is struggling with these symptoms, whether nursing or bottle-feeding, and you are concerned there might be a tongue-tie, please contact our office and we would love to get you in for a consultation to check for a restricted lip- or tongue-tie. The more checkmarks on that list of symptoms, the higher the chances of having a tongue- or lip-tie. Call 205-419-4333 to set up a consult, or send us a message. It would be an honor to help you and your family. – Dr. Baxter