Do Tongue-Ties Go Away? Do They Stretch Out?

These are common questions we get daily and they are definitely important to answer. Because if tongue-ties go away, and mom can just “tough it out” for 6-12 months, some moms would prefer to sacrifice their comfort for their baby, so the baby doesn’t have to get a procedure (I guess that’s what parenting is anyway, giving up your life in many ways to help your children!). The issue is that tongue-ties cause not just poor weight gain or nursing pain – the two items traditionally seen by providers to be related to ties, but can cause many issues in infancy, childhood, and even into adulthood.

Tongue and lip-ties can cause a whole host of issues that many don’t realize until they are filling out our infant or child assessment sheet (see below). You may want to see how many your child checks off, and if it’s more than a few, a consultation with us, or a tie-savvy provider would be warranted. Reflux, gas, colic, coughing or choking while eating, hiccups (more than once a day), unable to hold a paci, spitting up, mother’s nipple distortion or damage, trouble taking a bottle, and poor sleep quality, can all be related to a tie. So the first step is figuring out what current symptoms a baby has, and if it’s affecting a baby or family’s quality of life, it’s worth a release.

Here are the most common infant symptoms from our assessment sheet: 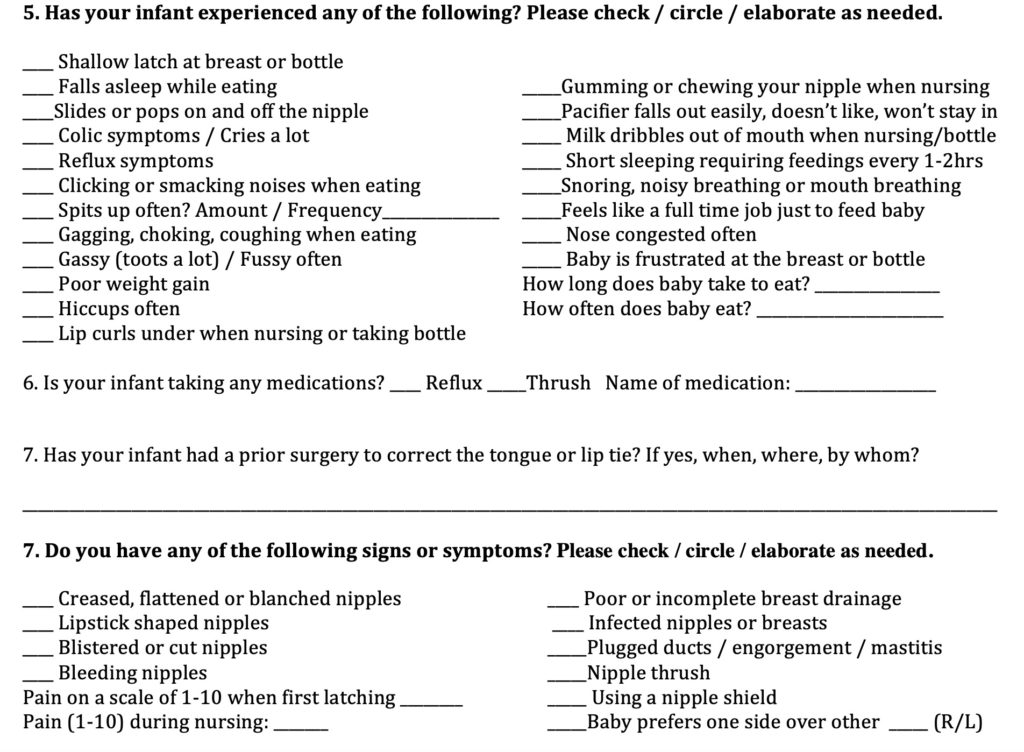 Because… they do not stretch out or go away. The featured image on this post is of a child with a tongue-tie, but without treatment, that tissue will persist until adulthood. Often other providers will say “don’t worry about the tie, it will stretch out, or the child will fall and rip it.” Children often do fall and nick the lip-tie (and it bleds a lot), but rarely release the whole thing, and falling and ripping the tongue-tie is nearly impossible. Also, studies on the makeup of the frenum (the tie) have been done where they dissect out and see what is inside. It’s mostly fascia, which is connective tissue, and mostly type 1 collagen that is resistant to traction or stretching. (Mills, 2019, Martinelli, 2014) So, it’s no less likely to stretch out than if your fingers were stuck together at birth, webbed fingers, or syndactyly, and they just spontaneously separated. Can you imagine someone telling the parent, “Don’t worry, he’ll fall and rip his fingers apart!” No! Just like we wouldn’t leave a child with webbed fingers stuck together, but instead, have them surgically, precisely separated to give him the best chance at normal use of his hand, it’s not right to leave a child with an obvious tie (>50%) even in the absence of significant current symptoms.

I say “obvious tie” because in fact, most of our patients, have less obvious (<50% of the way to the tip) restrictions that cause lots of symptoms for mother and baby. Rarely, we will have a family come in and they have very few, maybe only two or three symptoms, but the child’s tongue is to-the-tip, or close to it. It’s not the length of the tie that is important, but the symptoms it is causing.

Some of our moms and babies with less obvious ties have struggled through the infant period with terrible nursing trouble including pain while breastfeeding, dealing with excessive spit-up (deemed a “laundry issue” or “cosmetic issue”), reflux medication, painful gas, colic, and sleepless nights. Then they get older and start solid feeding, and the baby gags, chokes, spits out food, and can’t seem to get the hang of solids. And then they have speech delay or trouble with articulation, or it seems like their speech is “thick.” All the while, they have “just been a terrible sleeper” and move around in their sleep, are light sleepers, wake often, and mouth breathe or snore at night. This is the typical patient that we see at least a few times each day as an older child that struggled mightily in the first few years of life. So back to the question, do tongue-ties go away? For most babies as they get older, the problems just change, they don’t go away. And even a “minor tie” (no such thing, if it’s causing problems it’s worth addressing!) can cause life-changing issues to babies, children, and even adults.

For most babies as they get older, the problems just change, they don’t go away.

Unfortunately, a few opinion pieces (NOT research) were published in the 1950s and 1960s saying essentially, “Don’t worry about the tongue-tie, it will stretch out, not cause problems, definitely not cause speech delay, and if they’ve made it to four years old, it won’t need to be done at all.”(Wallace, 1963) These are unhelpful opinions, but they were put into pediatric textbooks as unquestionable truth, and taught to pediatricians, dentists, speech therapists, with not one shred of evidence to back them up... except they would find a picture of a child with a to-the-tip tie with good speech and say – “Ah! See! He can talk and his tongue is tied to the tip.” We also see kids with a to-the-tip tie who can sometimes compensate and learn to speak perfectly, but they have other issues with sleep, eating, neck tension, headaches, and other more adult symptoms that again don’t go away, just change as the child matures.

So what should you do? Check out our infant assessment sheet, and see if your baby has current issues. If the symptoms are present, it’s worth an evaluation, even if it’s not an obvious restriction. If there are no current issues, and no obvious string or tie, then it’s likely a “normal frenum” so just leave it alone, but if you notice issues with speech, sleep, and eating later on as the child gets older, consider a possible tie. If it’s an obvious string, but just a few current symptoms, then consider having it evaluated and discuss the risks and benefits with a provider who routinely (at least 5-10 a week) treats tongue-ties. If you would like to schedule a consultation with us, call us at 205-419-4333, or send us a message.

Hope this has been helpful!